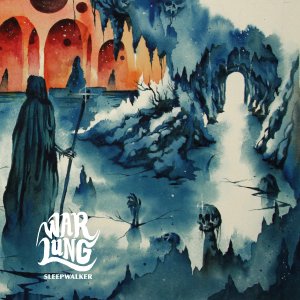 Founded in 2016, former members of Houston’s The Dead Revolt and Rivers joined forces to push the limits of song writing and creativity. Inspired by the sounds of old, WARLUNG has taken what the 70’s era of rock and psychedelia gave us and turned it into a hi-powered, white knuckled ride, down the rock n’ roll highway. The debut album is entitled, “Sleepwalker”.

Warlung came on the scene late in 2017, I remember listening to it after several recommendations and bandcamp links were shared and everyone seemed to really dig it. It even made some folks best albums of the year lists that I remember reading. It was even voted on by several contributors late last year but did not garner enough votes to place in the top 25. What’s important now, is the band discovered the doom charts and sent in some download codes on bandcamp for all to enjoy. For those who may have missed out on this stunning album, go ahead and have one on the house. A great example of the fact that just because the music isn’t hot off the press, it still deserves a chance to be heard, and listened to regularly. Talking to the band it sounds like they are in the middle of their second album and keep tuned in as it may come out as early as late 2018 or early 2019. Labels take heed these guys are looking for wax and eager to shred. If this debut is any indication of the band’s potential, we may have something special, here in the heavy underground.

Pick an 8-digit code, any code and enter it at the links below. If it’s taken, try the next one. They will go fast so act fast. It helps promote further if you click the “add to collection” box and make sure you’re logged into your free account. Also be sure to download from the link it takes you to or the email that comes when you have an account in your choice of format including mp3, WAV,  and FLAC for all you audiophiles out there especially since this is a week early pre-release which you’ll have to download to hear in full until the 15th of September.

First, if you don’t already have one, make sure you sign up for a free bandcamp fan account to add this to your collection and join in on all the fun. Follow your favorite bands, your favorite fans and start down the path to extreme addiction. You can’t afford to or not to do it.

Special thanks to George representing Warlung for this Friday Freebie offering. And thanks to the ongoing contributors and readers of the monthly Doom Chart.  You folks help give voice to the heavy underground:

Feel free to send in your albums to stonerdoomcharts@gmail.com where they’ll be delegated to the crew for a better chance at getting heard and voted on. Anything goes. If you run a blog, music review site, radio show, zine, etc in the realm of the heavy underground music scene and are interested in joining the team of contributors, drop us a mail as well.